This variation is not unexpected. Schools recieve funding from a variety of state, city, and federal sources, many of these funding streams attempt to direct resources to students deemed to have greater needs. Moreover, per pupil spending is also a function of school size, with large schools generally receiving less funding per pupil than schools with fewer students.

The results displayed by borough and funding source shed more light on these differences. 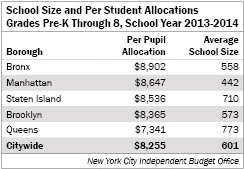