The city’s Department of Education runs nine specialized high schools that are among the most selective of the city’s public high schools. Eight schools admit students based solely on the score attained on the Specialized High Schools Admissions Test and admission to LaGuardia High School is based on an audition. All 8th graders and first-time 9th graders who are New York City residents are eligible to take the test. The score required for acceptance depends on the school and varies each year.

Federal Title I-A funds provide assistance to schools and local educational agencies (in New York City, the Department of Education) that serve a large number or share of students from low-income families. Under federal rules, school systems that receive at least $500,000 in Title I-A funds must use at least 1 percent of their annual allocation for activities that promote parental involvement. Title 1-A requires parental input into determining the activities provided as well as their implementation. Although schools also use additional sources to fund parental involvement, only Title 1-A requires that parents be involved in planning for the use of these funds. 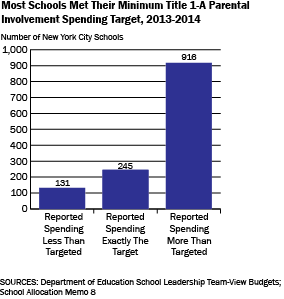 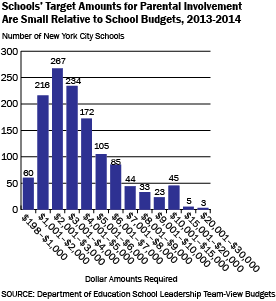