The Department of Transportation repairs and maintains the city’s streets. To fulfill this task, the department performs an ongoing street quality assessment and rates sections of every street in the city on an 18-month rolling basis on a scale from 1 to 10. Ratings are categorized into “poor” (1-3), “fair” (4-7), and  “good” (8-10), with the exception of local streets for which a rating of 7 is deemed “good.” 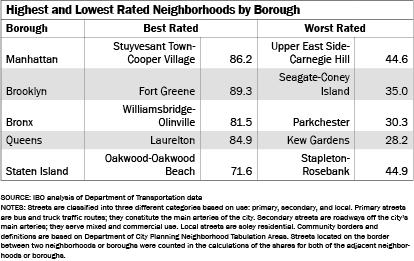