The city makes an annual payment to the Metropolitan Transportation Authority (MTA) to support the authority’s capital program. NYPIRG’s Straphangers Campaign asked IBO to review the annual contributions to see if they have kept pace with inflation. 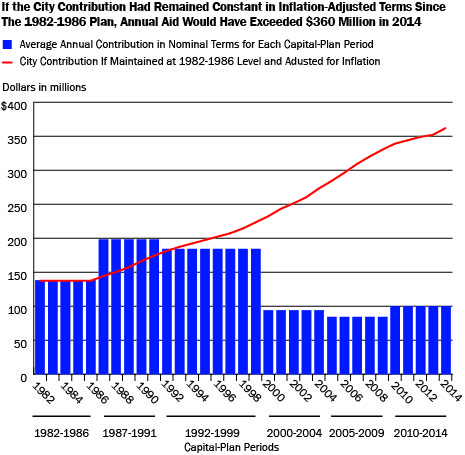 New York City and state also provide indirect support to the capital program through dedicated tax revenue—in most cases, revenues predominately collected in the 12-county MTA region—that flow into the MTA’s operating budget. These revenues, which have grown substantially over the past three decades, are used to pay debt service on MTA bonds that finance capital projects as well as the operating expenses of the transit system. IBO estimates that New York City residents alone generated around $3.1 billion in city and state tax revenue for the MTA in 2014, compared with just $235 million in 1983.