In January, Mayor de Blasio announced NYC Care, a city-funded NYC Health + Hospitals initiative expected to cost $100 million per year when fully implemented in fiscal year 2022. While the city’s public hospital system already provides care to anyone, regardless of ability to pay and immigration status, a key goal of the new initiative is to link the uninsured with a primary care provider—diverting patients from unnecessary emergency room visits for routine care. The program will also support efforts to boost enrollment of those who are eligible for the public health system’s MetroPlus insurance plan. There were about 615,000 uninsured New Yorkers in 2017, roughly 7 percent of the city’s population, according to the latest figures from the U.S. Census Bureau. Among city residents who were not U.S. citizens about 300,000, or nearly 22 percent, were uninsured—and the rate was likely even higher among noncitizens who were undocumented.

Because NYC Care relies on using NYC Health + Hospitals facilities, the success of the initiative is dependent in part on accessibility. Are the city’s more than 70 public hospitals and clinics located in neighborhoods with heavy concentrations of the uninsured? IBO has mapped the location of public hospital facilities and the share of uninsured in the city’s 59 community districts.

Where the Uninsured Reside and Location of Public Hospital System Facilities

With the full implementation of the Affordable Care Act, the share of adults in New York City without health insurance dropped from 20.9 percent in 2013 to 13.8 percent in 2014, a 7.1 percentage point decline. To gauge the effect on New York City Health + Hospitals, we focus on adult outpatient visits to H + H hospitals and diagnostic and treatment centers because some conditions that require inpatient stays, such as medical emergencies, allow for temporary Medicaid eligibility. 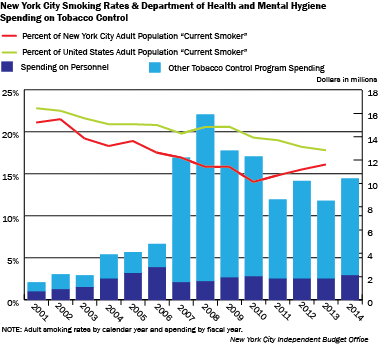