Over the past 10 years, New York City’s overtime spending has increased from $928 million in 2006 to $1.659 billion in 2015, an increase of $731 million, or close to 80 percent (about 40 percent after accounting for inflation). While the increase in overtime spending over the 10 years appears sizable in dollar terms, as a share of total city spending the increase looks somewhat more modest: growing from 1.7 percent in 2006 to 2.2 percent in 2015. 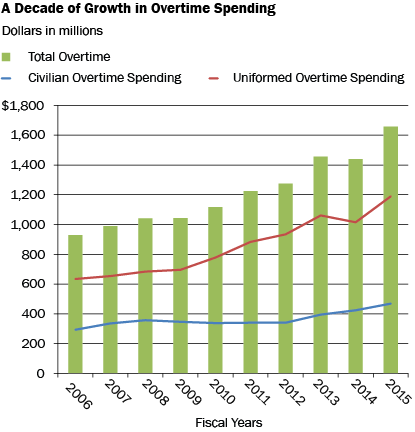 Before the recent announcement of ThriveNYC, the de Blasio Administration’s initiatives to improve access to mental health programs for youth, adults, and seniors, the Mayor had previously launched measures to boost behavioral health programs for the city’s inmate population. With an increasing share of inmates in the city’s jails struggling with behavioral health issues—from about 30 percent in 2010 to nearly 40 percent in 2014—the Mayor appointed a task force in June 2014 to develop a plan to improve the way the criminal justice system addresses the needs of this population. Six months later, the task force issued a plan with five key components and a price tag of $134 million over four years, all but $40 million of it is funded by the city itself. While the task force report identified the total amount of spending, there was no breakdown of the spending for each initiative. IBO has obtained detailed spending plans from the Mayor’s Office of Criminal Justice, which are shown below.