New York has often been characterized as a city of contrasts, especially when it comes to wealth and poverty. To get an idea of how those contrasts may have changed over the past decade, IBO took a look at where the 10 highest and lowest income census tracts in the city were located in 2000 and 2011 based on the median household incomes in those tracts. 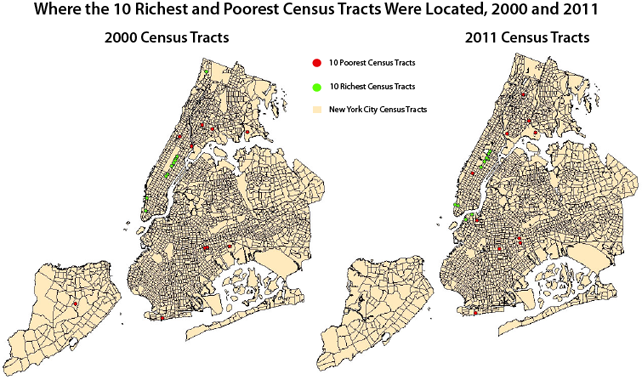 Looking at these top 10, bottom 10 compilations, a few observations can be made that are both telling and not wholly unexpected: wealth tends to be geographically concentrated in New York City, poverty more dispersed. While median household incomes in 2011 for the city’s highest income census tract in 2011 is still below 2000 levels (when adjusted for inflation), the gulf between rich and poor remains large.

IBO’s Julie Anna Golebiewski compiled the lists of highest and lowest income census tracts using the 2000 Census and the 2011 American Community Survey five-year estimates. Census tracts vary in size both spatially and in number of residents, though the U.S. Census Bureau aims for census tracts to contain about 4,000 people and are initially drawn to encompass a demographically homogenous population. To aid our comparison, all incomes from 2000 are expressed in 2011 dollars.

Conversely, the city’s extreme wealth is concentrated in relatively few neighborhoods. In 2000, 9 of the 10 highest income census tracts in the city were located in Manhattan—the one tract outside of Manhattan was in the Riverdale/Fieldston section of the Bronx. This geographic concentration of wealth becomes clearer with the observation that five of those highest income census tracts were located on the Upper East Side. In 2011, the story was similar. Eight of the 10 wealthiest census tracts were located in Manhattan, six of them on the Upper East Side.

One significant geographic change was that two Brooklyn census tracts muscled into the 2011 top 10 list—one in Brooklyn Heights, the other in DUMBO—where none had made it in 2000. Over the decade, median household income grew by more than 45 percent in each of these census tracts. In Battery Park City, another newcomer to the top 10 list in 2011, median household income increased by more than 25 percent during the years 2000-2011.