Last month the Mayor presented his Preliminary Budget for 2014, which included the projection that revenue from the property tax would increase by more than $900 million in the fiscal year that begins July 1 and total $19.4 billion. But don’t start spending all of that additional revenue quite yet.

The property tax revenue projection is derived from the most recent estimate by the city’s Department of Finance of changes in assessed value of properties across the city. A quick look at the latest assessment roll by IBO’s Ana Champeny finds that the city seems to be adding some unlikely sites to its roll of taxable properties. 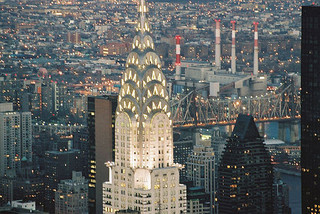 Take the Chrysler Building as a prime example. It has been tax exempt for decades in order to help subsidize tuition-free education at Cooper Union. Yet the Chrysler Building shows up on the city’s initial tax assessment roll for fiscal year 2014 with a taxable assessed value of $184.4 million. This is the amount used to compute tax liability and should not be confused with the city’s estimate of the building’s market value, which the finance department lists at $448.7 million. (The city’s property tax system can be mind-numbingly complex. To learn more about the system and how it got this way, see IBO’s 2006 report.)

You’ve probably heard of the Barclays Center in Brooklyn, that big new arena that was the source of much controversy right up until Jay-Z took the stage the night it opened. A lot of the controversy centered on the city’s subsidy and the use of the funds the developer would otherwise owe for property tax to instead go towards paying the annual interest and principal on the money borrowed to build the arena. Under this deal the property should be recorded as fully tax exempt. But the arena shows up on the 2014 tax roll with a taxable assessed value of $329.1 million.

How about the Museum of Modern Art’s Museum Tower? The tower was developed through an arrangement with the Trust for Cultural Resources that enables cultural organizations like MOMA to generate revenue by spinning off part of their property for private development, which remains exempt from the property tax. Although the trust’s board of directors includes the city’s Deputy Mayor for Economic Development and the head of the city’s Economic Development Corporation, Museum Tower shows up on the tax roll for the first time since it was built in 1985 with a taxable assessed value of $79.6 million for 2014.

There are many other examples as well such as Interchurch Center, which is part of Riverside Church; 3040 Broadway, owned by Columbia University; and the Church of the Heavenly Rest, which has been at 90th Street and Fifth Avenue and fully tax exempt for more than 80 years.

When the Mayor’s budget office forecasts property tax revenue, it assumes that some of the initial increase on assessments will be rolled back due to challenges by property owners and administrative changes by the finance department. But some of the jump in assessed values for 2014 is driven by these unusual shifts in exemption status, and may augur a larger number of properties than usual with assessment changes before tax bills are sent in June. Right now, these six buildings alone account for about $70 million in potential property tax revenue, which is about 8 percent of the anticipated growth in property tax collections next year.

Perhaps the appearance of some buildings on the roll of taxable properties could be explained by an effort initiated by the finance department last year to ensure that only eligible properties are getting tax exemptions. This effort requires owners to file annual applications for the exemption. But the failure to submit the necessary paperwork doesn’t explain why schools and parks department sites are also showing up on the assessment roll as taxable properties. Don’t think, though, that the glitches are limited to those showing higher assessments. The sale of buildings owned by the Jehovah’s Witnesses in Brooklyn Heights received a fair amount of press attention over the past couple of years. For the city, the sales should mean the return of tax-exempt church property to the tax rolls.

Somehow, 161 Columbia Street and 50 Orange Street are still listed in the property records as receiving tax exemptions as houses of worship. Together, the mistaken exemptions for the two buildings are worth more than $420,000 in tax savings for the property owners in the coming fiscal year.