For decades, the Gowanus Canal has been synonymous with a polluted, and sometimes stinking, body of water. Soon after the Gowanus opened in the 1860s, it was generally treated as an open sewer. Industrial waste from coal yards, refineries, and tanneries as well as raw sewage poured into the canal. This fetid stew contained hazardous substances such as PCBs and polycyclic aromatic hydrocarbons, pesticides, and heavy metals such as mercury, copper, and lead. 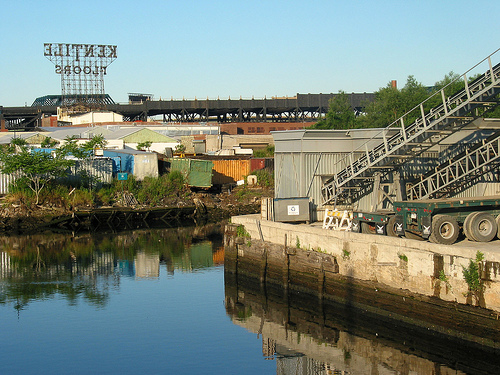 Fast forward to March 2010 when the federal Environmental Protection Agency declared the 1.8 mile Gowanus Canal a Superfund site and set about developing a plan to contain the hazardous materials in the canal’s sediment and to prevent recontamination. Part of the Superfund process also includes determining who’s responsible for creating the environmental mess and making those responsible pay the cost of alleviating the conditions.

The EPA is still determining who is responsible and the degree of their culpability. Some of the companies being investigated may not be surprising, such as National Grid and Consolidated Edison. But based on the agency’s review so far and the remedies proposed in a plan released late last month, one of the entities on the hook for footing the cleanup bill may be the city itself.

The federal environmental agency estimates that its preferred plan (there are also some alternatives) would cost in the range of $467 million to $504 million. New York City’s share of that cost could be substantial.

For years, the city has allowed sewage and stormwater to spew into the canal. Looking just at the period from 1952 until the Red Hook Wastewater Pollution Control Plant opened in 1987, the city dumped about 20 million gallons of sewage a day into the Gowanus. The Red Hook plant and the nearby Owl’s Head wastewater plant still send sewage and stormwater into the canal when there’s an appreciable amount of rain and the two plants exceed their capacity for treating the wastewater. In a September 2011 presentation, the city’s Department of Environmental Protection estimated that about 300 million gallons of stormwater and sewage drained into the canal in a typical year, about two-thirds of it untreated sewage.

To reduce the continued contamination of the canal from what are called combined sewer overflows, or CSOs, the EPA wants the city to build holding tanks that will store the wastewater until the two treatment plants have sufficient capacity to handle much of the excess. The EPA estimates the cost of the tanks to be about $78 million.

A general reading of the EPA’s proposed cleanup plan and some other documents gives the impression that the city’s share could include more than the cost of the tanks as the federal agency sorts out who is responsible for various aspects of the canal’s pollution. Much of the heavy industrial uses along the canal ended long ago. National Grid owns the three sites where plants produced manufactured gas from coal, oil, and water to be used for street lights and home heating. These plants appear to be a significant source of the canal’s past pollution and may lead the utility to also bear a heavy share of the remediation costs. But the EPA’s extensive discussion of the role of CSOs in the canal’s past and future may be indicative of the extent to which federal officials believe the city should be underwriting the cleanup.

Any spending due to the Superfund plan comes on top of substantial sums the city has already been investing to improve the water quality of the Gowanus and reduce CSOs. Based on a review of capital budget spending by IBO environmental analyst Justin Bland, over the past 12 years the city has invested nearly $160 million to repair and upgrade a flushing tunnel that helps oxygenate the canal’s relatively stagnate water and an additional $18 million on other Gowanus cleanup-related environmental projects. The city plans to commit an additional $51 million for these projects over the next four years.

The Bloomberg Administration strenuously opposed the federal Superfund designation and developed its own plan for restoring the Gowanus. The Mayor argued that the Superfund designation could cause years of legal battles and delay redevelopment of the surrounding area. But City Hall’s plan relied in part on Congressional appropriations for the canal, funds that the EPA’s regional administrator considered far from certain. Insufficient funding could mean a lag in the cleanup.

The EPA is holding public meetings in Brooklyn on its plan on January 23 at PS 58 and January 24 at the Joseph Miccio Community Center. Written comments until March 28.