Long before Sandy slammed the city’s coastline, the Bloomberg Administration had been sounding alarms about coming threats to the city due to climate change. In well-known reports such as PlaNYC and through less publicized efforts such as the convening of scientists and risk management experts for the New York City Panel on Climate Change, the Bloomberg Administration signaled that it clearly recognized the significant impact global warming and rising sea levels could have on New York. 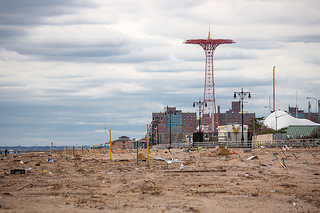 The Mayor’s March 2011 report Vision 2020: New York City Comprehensive Waterfront Plan forecast the coming of storms like Sandy and the potential affects: “The rise in sea level and increased frequency and magnitude of coastal storms will likely cause more frequent coastal flooding and inundation of coastal wetlands as well as erosion of beaches, dunes, and bluffs.” A few weeks later, in an update to PlaNYC, the warnings were reinforced: “As a city with 520 miles of coastline—the most of any city in America—the potential for more frequent and intense coastal storms with increased impacts due to a rise in sea level is a serious threat to New York City.”

Yet even as City Hall grappled with these concerns it continued to put substantial resources into major development projects on the waterfront, rezoning sites as manufacturing declined— including some in prime areas for flooding, the so-called Zone A evacuation areas. Just one month before Sandy struck the city, Mayor Bloomberg announced a plan by private developers to build a $500 million complex on city-owned land on Staten Island’s North Shore that would include the world’s largest Ferris wheel as well as a hotel and outlet mall. Part of the site sits in a floodplain.

An even larger development project is planned on the Coney Island waterfront, one of the neighborhoods hardest hit by Sandy. The city has rezoned the area to allow the development of hotels, housing, and a new amusement park, and has allocated more than $400 million for sewer upgrades, land acquisition, lighting, boardwalk and park improvements, and other projects to foster the redevelopment plan. On the Queens waterfront, the city is investing $147 million in the Hunters Point South project, which also sits in Zone A. Already under construction, Hunters Point South includes 5,000 apartments, a 1,100-seat school, and retail space.

To be fair, the Bloomberg Administration has taken steps to protect the city from the affects of rising sea levels and storm surges, following existing city building codes and Federal Emergency Management Agency guidelines. But these guidelines may not be adequate in the face of storms with the fury of Sandy.

As Yale University’s Environment 360 Web site noted, “The storm easily overwhelmed many of the relatively minor adaptations that New York had already put in place.” For example, Brooklyn Bridge Park, where another large development project is planned, was created with what are called “soft edges.” These are supposed to help reduce the force of waves and accommodate rising tidal levels. While these edges may work in many instances, they were no match for Sandy, which swamped the park and sent water lapping at the structure housing the newly installed carousel.

In Sandy’s wake, Governor Andrew Cuomo, Mayor Bloomberg, and Council Speaker Christine Quinn are promising to ramp up efforts to protect the city and the city’s infrastructure from what many believe is the increasing threat posed by major storms. Speaking to a group of business and civic leaders, Council Speaker Quinn said, “We…must rethink the way we build in neighborhoods that were destroyed by the storm.”

Such rethinking takes time for evaluation and planning, time that some city officials and developers seem disinclined to take. Just last week, as many Staten Island residents and business owners continued to clear the rubble from Sandy—and mourned the loss of family and friends—the city’s Economic Development Corporation held a hearing to advance the Ferris wheel project on the North Shore.

The city can press ahead with waterfront projects like the one on Staten Island’s North Shore, as well as others throughout the five boroughs, before there is a clearer plan for the kinds of steps New York will take to minimize the danger from future Sandys. But doing so increases the risk that the next “superstorm” will exact an even higher price tag.