February marks the first month that the city will not pay subsidies for families who signed leases under the Advantage rental assistance program. The city officially eliminated Advantage nearly a year ago after Governor Cuomo ended state support for the program, leaving the city without a plan to move families out of homeless shelters and into permanent housing. While no new families have entered the program in almost a year, the city had been under a court order to continue paying the subsidies for families already enrolled—until earlier this month when the order was lifted. The loss of the subsidy jeopardizes the housing of the 8,000 to 9,000 formerly homeless Advantage recipients still in the program. The city’s decision to stop paying the subsidy comes as more families are already staying longer in shelter and follows shortly after Governor Cuomo’s suspension of $15 million in homelessness aid to the city for the next fiscal year as part of his budget proposal.

The city ended Advantage, a rental assistance program that paid a portion of families’ rents for up to two years, when the state withdrew both its funding and the federal match for the program last April. (See Analysis of the Mayor’s Preliminary Budget for 2012 for details.) When advocates for the homeless sued, the city was ordered to continue to subsidize families who had already rented apartments through the program, while the court determined whether the city could stop making payments for these families before their leases end. Although final resolution is pending, in the interim, the order requiring the city to continue payments was lifted earlier this month and the city announced it would not pay the February subsidies. (The case is currently on appeal, the city won in trial court.)

The city had already spent $71 million on the Advantage payments in the first seven months of fiscal year 2012, before the court order was lifted. In addition to these costs, it is likely that the cost of family shelter will now rise. Without an alternate program or change in policies to help families move out of shelter, the length of time that homeless families stay in the city’s shelter system has increased. In the eight months after the city stopped signing new Advantage leases, the average shelter stay for a family was 316 days, nearly two months longer than the average of 258 days during the same eight months in the year before the Advantage program ended. As families stay longer, the total number of families in shelters has also begun to increase in recent months. And now that the city has stopped paying subsidies to former Advantage tenants, some of these families may also return to shelter, which would further drive up city homelessness spending.

This potential increase in shelter costs comes after the suspension of homeless aid from Albany. After the state cut Advantage funding last April, it provided a $15 million grant for a loosely defined new homelessness program in New York City—about a fifth of what the state had spent on Advantage in the prior year. According to the Mayor’s Office of Management and Budget it was largely left up to the city to decide how to use the $15 million, and the city used $10 million of the funds to help pay for the Advantage program’s continuing costs. However, the governor’s most recent budget suspended the homelessness grant for the upcoming state fiscal year noting that, “because the initiative remains under development, additional funding will be suspended pending a determination of the efficacy of the program.”

Thus, the loss of funds from Albany comes when more families are staying longer in the city’s shelter system, and when it is likely that their numbers will continue to increase. Even if the courts decide that the city must pay Advantage subsidies until the end of the remaining tenants’ leases, without a replacement program or policy change the pathway to permanent housing for current and future homeless families remains uncertain. 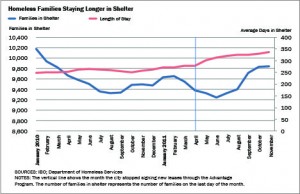