New York State’s budget for this year includes $170 million in savings from cuts to the Office of Court Administration, which has already resulted in the layoff of more than 400 state court system employees, or about 2.5 percent of the system’s workforce statewide. But savings realized by the state from these cuts could mean millions of dollars in additional costs to New York City if the pace of processing criminal cases slows. That’s because people under arrest may be spending longer periods awaiting trial in the city’s jails—additional jail time that will largely be funded by the city.

The likelihood of slower court processing is almost certain. As state Chief Administrative Judge Ann Pfau told the New York Times, “Delays are going to be more built into everything we do, unfortunately….If you are waiting for a trial, the trial that is ahead of you is going to take longer.”

Much of the fiscal effect on the city would show up in the Department of Correction’s budget. More than 70 percent of inmates in city jails on Rikers Island and in borough-based facilities at any given time are detainees, meaning they are being held pending disposition of the criminal charges they are facing. The pace of criminal case processing in the courts is therefore a major determinant of the cost of running the city’s jail system, where the department’s total cost of incarcerating each inmate averages $387 per day.

For those inmates convicted of serious crimes and sentenced to time in the state prison system, the time they will actually spend in state prison (at the state’s expense) is reduced by the amount of time already spent in city custody prior to conviction and sentencing (almost entirely at the city’s expense). So that means the longer prisoners remain in city custody during adjudication of their cases, the larger the city’s—and the smaller the state’s—share of total imprisonment costs.

As reflected by the trend line in the graph below, the average amount of city jail time deducted from the state prison sentences of convicted felons from the city has already been moving upward in recent years, rising from 5.5 months in 1994 to 9.6 months in 2010. This trend is consistent with the slower pace of deciding some cases in recent years. While the Office of Court Administration’s own standards call for felony cases to be decided within six months from the date of filing, the percentage of felony dispositions in the city failing to meet that standard grew from 23 percent in 1994 to 37 percent in 2010.

Increases in jail time translate into additional city costs. For example, if slowdowns in case processing result in another month being added to the average time state prison-bound inmates spend in city jails, IBO estimates that the city would incur about $15 million in additional annual expenses at the Department of Correction. In addition, longer periods of incarceration for the thousands of detainees held temporarily in city jails each year but not ultimately destined for state prison—those held on misdemeanor charges, alleged felons ultimately acquitted, etc.—would also result in additional corrections costs borne by the city. 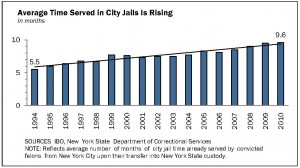 Besides potential increases in corrections department costs, the hit to the city’s budget from delays in criminal case processing could show up in other places as well. For example, police overtime expenditures could be driven up if cutbacks in court staff result in a longer arraignment process, with police officers spending additional time processing arrests. According to a number of recent press accounts, the time from arrest to arraignment has already increased.

So when it comes to cutbacks to the court system to help close the state’s budget shortfall, some of Albany’s savings may come at New York City’s expense.