How Much “CARE” for NYC?
An Estimate of Federal Coronavirus Emergency
Relief Act Funding to the City Budget

The Independent Budget Office estimates that $5.3 billion in aid from the federal government’s four coronavirus relief packages will flow to the city budget, largely in this fiscal year and next. These funds are in addition to federal aid granted to public agencies that provide essential city services but are outside the city budget, including $3.8 billion for the Metropolitan Transportation Authority (MTA), at least $818.6 million for NYC Health + Hospitals (H+H, the city’s public hospital system), and $211.9 million for the city’s public housing authority. These projections represent IBO’s best estimates based on the data currently available. New data is being released on a near-daily basis, however, and details of many of the local funding formulas have yet to be published. Costs reimbursed by the Federal Emergency Management Agency (FEMA) are not included in these estimates.

The majority of the $5.3 billion in aid that IBO projects the city will receive must be used to cover direct costs incurred by the city due to the Covid-19 pandemic or to fund programs that provide aid to city residents impacted by the resulting downturn, such as increased funding for existing food and rental assistance programs. The more than $700 million in federal education aid included in this total will replace state school aid cut by the Governor in the state’s recently enacted budget. Therefore, while this funding represents a considerable sum to help pay for the city’s Covid-19 response, it does little to address the $9.5 billion shortfall in city tax revenue that IBO expects to result from the economic downturn caused by the pandemic over the 2020 and 2021 fiscal years. 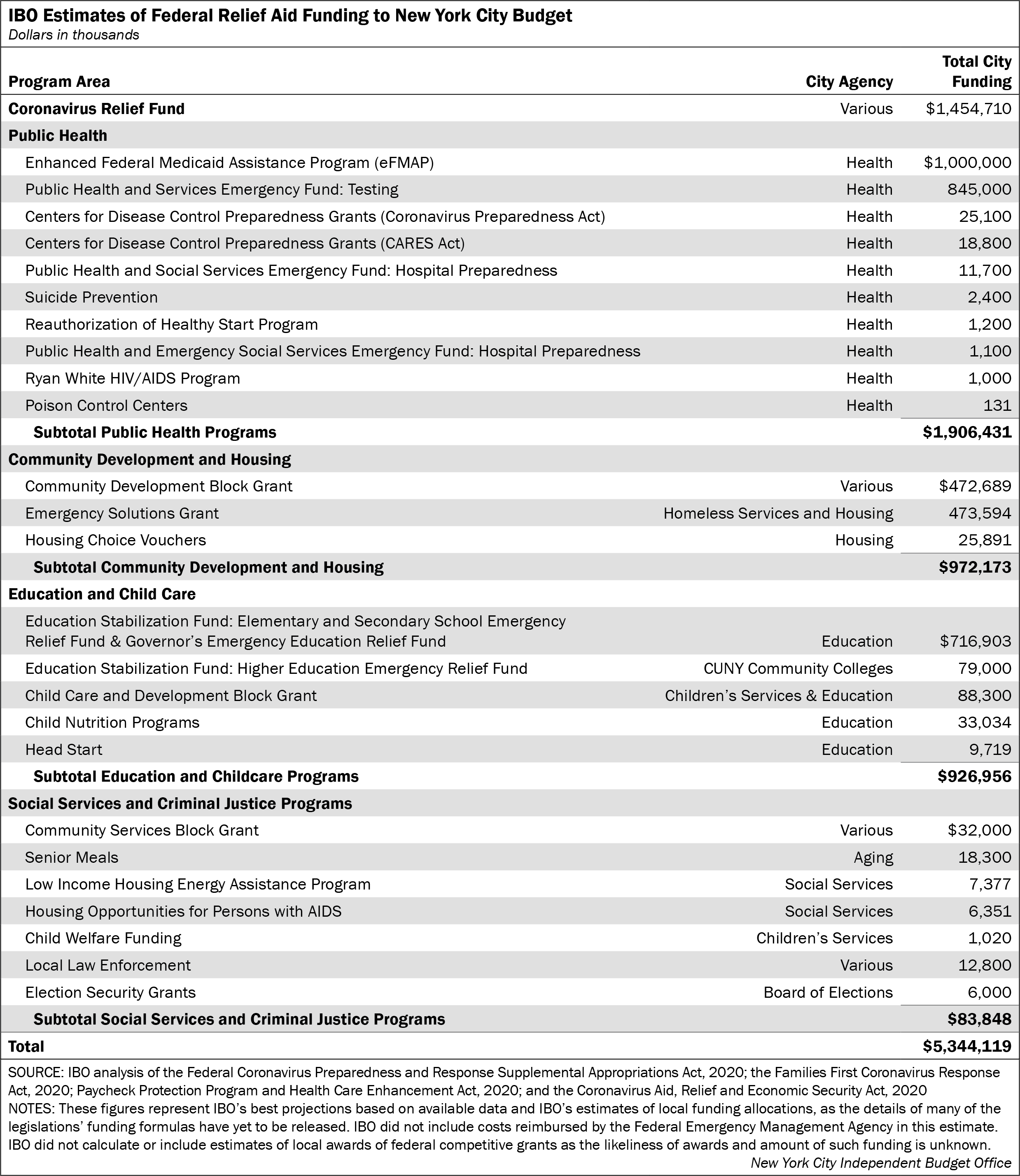 The Families First Coronavirus Response Act followed on March 18, 2020 with provisions for paid sick leave, food programs, a mandate that Covid-19 tests be administered at no cost to individuals, and expanded unemployment benefits and coverage.

On March 27, 2020, President Trump signed the third bill, the Coronavirus Aid, Relief, and Economic Security Act (CARES Act), which provides more than $2 trillion dollars in direct support to households, businesses, states, some local governments, and the health care industry. The majority of the funds flowing to the city budget come from the CARES Act.

A fourth bill, the Paycheck Protection Program and Health Enhancement Act, was signed on April 24, 2020. It largely increased the funding made available to small businesses and health care institutions in the CARES Act.

Coronavirus Relief Fund. Just over a quarter of the $5.3 billion in aid that IBO estimates the city will receive comes from the $150 billion Coronavirus Relief Fund included in the CARES Act. IBO estimates that the city will receive nearly $1.5 billion in direct aid from this fund. While the majority of the Coronavirus Relief Fund flows directly to state governments, local governments with populations of 500,000 or more can elect to receive a portion of their state’s funds directly. New York State received an allocation of $7.5 billion, including the $1.5 billion that will flow directly to the city.

The CARES Act requires the city to use these funds to pay for “necessary expenditures incurred due to the public health emergency with respect to the Coronavirus Disease 2019.” In order to be eligible for reimbursement, the spending must not have been included in the city’s budget before the CARES Act was enacted and must occur from March 1, 2020 through Dec. 30, 2020.

Public Health. IBO estimates that public health provisions included in the four federal emergency aid bills will net city programs $1.9 billion in funding for expenses incurred to fight the pandemic, with millions more flowing to the city’s public hospital system (see sidebar, page 4). Of these provisions, the largest impact on the city budget comes from changes to Medicaid funding. The Families First Coronavirus Act increased the share of Medicaid paid by the federal government by 6.2 percentage points (called the enhanced Federal Medical Assistance Percentage, or eFMAP.) In New York the federal, state, and city governments share Medicaid costs, so if the state allows the savings from the eFMAP to flow through to localities across the state—as it has done in the past—there would be savings for the city. We expect the city will save $1.0 billion in Medicaid payments due to eFMAP—funds it can redirect for other uses.

The most recent aid package provided up to $11.0 billion for states and local governments to expand testing for Covid-19. While the formula for local awards has yet to be released, based on language in the legislation, IBO estimates that the New York City’s health department will receive about $845.0 million of this funding.

The city’s health department will also receive funds through the Center for Disease Control (CDC) Preparedness Program. The CDC has already allocated $25.1 million authorized by the Coronavirus Preparedness Act to the city and $18.8 million through the CARES Act, with the possibility of more. These funds can be used for monitoring the spread of the coronavirus, laboratory testing, contact tracing, the purchase of personal protective equipment, and related public health activities.

IBO estimates that another $17.5 million in CARES Act funding will be available to the city for a variety of programs, including hospital preparedness, the city’s Ryan White HIV/AIDS program, suicide prevention, and poison control.

Community Development and Housing. IBO projects that aid from federal community development and housing programs will total about $972.2 million. Included in this funding is $472.7 million in new Community Development Block Grant (CDBG) awards. Authorized by the CARES Act, the additional CDBG funding is relatively flexible. Eligible uses include construction of public facilities (such as clinics and expanded hospital capacity), economic development programs to create or preserve jobs, training programs to increase the number of health care workers, and meal delivery to quarantined individuals. The Department of Housing and Urban Development (HUD) has already allocated $102.1 million in emergency CDBG funds to the city based on its annual CDBG formula grant. Additional funds will be awarded based on a formula that takes into account the impact of Covid-19 on specific localities. IBO estimates these additional CDBG funds could total $370.6 million for New York City.

In addition to the CDBG funds, IBO estimates the city will receive $473.6 million for homeless and housing programs through an increase to HUD’s Emergency Solutions Grant included in the CARES Act. These funds can be used to build and operate emergency homeless shelters, create new rental assistance programs, and provide services to homeless populations. Like the CDBG funds, a portion has already been allocated to the city based on its annual formula grant and additional funds are expected.

The CARES Act also provides increases to existing federal rental-assistance programs, including the Housing Choice Voucher program (or Section 8). Tenants in this program generally pay 30 percent of their income in rent to private property owners and the federal subsidy pays the balance. As tenants’ incomes decline during the economic downturn, additional subsidy is needed to make up the difference. IBO estimates the city could receive $25.9 million for this program, funds that would eventually flow to landlords. (The majority of the city Housing Choice Program is administered by the New York City Housing Authority, or NYCHA, which also will receive funding. See sidebar).

Education and Child Care. IBO identified about $927.0 million in aid for city education and child care programs authorized in the CARES Act.

Both of the relief funds are allocated to states based on formulas outlined in legislation; states, in turn, pass funding along to localities. According to the U.S. Department of Education, New York State’s allocation totals $164.3 million for the Governor’s fund and just over $1.037 billion for the Elementary and Secondary School Fund.

Shortly after the CARES Act was signed, New York State enacted its fiscal year 2021 budget. Nearly all of the state’s allocation of both the Governor’s Relief Fund and the Elementary and Secondary School Fund were budgeted to offset a “Pandemic Adjustment” reduction in school aid statewide. New York City is slated to receive $716.9 million in school aid from the CARES Act, just equal to the $716.9 million Pandemic Adjustment reduction included in the state’s budget for fiscal year 2021.

Awards from the Higher Education Emergency Relief Fund are distributed directly to colleges and universities using a formula based on the shares of full-time students who are Pell Grant recipients. According to the U.S. Department of Education, the city university’s (CUNY) community colleges will receive $79.0 million, a third of the $237.0 million allocated to all CUNY schools (CUNY senior colleges, graduate institutions, and professional schools are not included in the city’s budget. See side bar above)

The CARES Act also provides supplemental funding for the city’s Child Nutrition Programs, which include the National School Lunch Program, the School Breakfast Program, and the Child and Adult Care Food Program. This funding is intended to provide grants to districts for planning and coordination of food service during the pandemic. With schools now scheduled to remain closed through the rest of the school year, IBO projects that the city’s Department of Education could receive about $33.0 million in reimbursements under the program. An additional $9.7 million will go the city’s Head Start program under the CARES Act.

The CARES Act increases the city’s Child Care and Development Block Grant by $88.3 million; $22.7 million of the aid will flow to the Department of Education and $65.6 million to the Administration for Children’s Services, according to IBO estimates.

IBO Social Services and Criminal Justice Programs. IBO projects that federal coronavirus relief aid for a variety of city social service and criminal justice programs will total $83.8 million. The largest share of these funds ($32.0 million) is expected through a CARES Act increase to the Community Services Block Grant, which funds a variety of programs largely through the city’s Department of Youth and Community Development.

IBO estimates that city programs providing meals to seniors impacted by Covid-19 will receive a total of $18.3 million through funding included in both the Families First Coronavirus Response Act and the CARES Act. (The CARES Act also increased funds available for the Supplemental Nutrition Assistance Program, also known as food stamps. These funds are paid directly to recipients, so they do not flow through the city budget. Based on the assumption that city residents will benefit from the same share of the increase as they received under the national program last year, IBO expects that New Yorkers could receive $620 million.)

Other social services programs expected to receive increased aid under the CARES Act include: the Low Income Housing Energy Assistance Program ($7.4 million); services for populations living with HIV/AIDS through the Housing Opportunities for Persons with AIDS program ($6.3 million); and about $1.0 million in increased child welfare funding.

Lastly, IBO estimates the city could receive an approximately $12.8 million increase in Justice Assistance Grant funding through the CARES Act to help cover costs incurred by the police department, Department of Correction, and the Mayor’s Office of Criminal Justice, as well as $6.0 million in Election Security Grant funding to help cover coronavirus-related costs during the 2020 election cycle.