The Covid-19 pandemic and the public health restrictions imposed to help limit the spread of infections have delivered a severe blow to the economy, leading to very large and abrupt job losses that are unprecedented in their scope and pace. Given the staggering job losses, IBO assumes that the U.S. economy has entered a recession, even if not yet captured in the official statistics. As the economy contracts, tax revenues will follow suit, particularly economically sensitive revenue sources such as income and sales taxes.

Although still lacking much of the information that IBO would typically rely on to estimate New York City tax revenues, we have constructed a pared-down economic forecast, premised on an assumption that the local economy will shed roughly 475,000 jobs over the 12 months spanning the second quarter of calendar year 2020 through the first quarter of 2021. The local economy gradually begins to add jobs starting in the second quarter, with job growth remaining slow through the end of 2022.

Relative to our January 2020 baseline outlook, IBO estimates that such a scenario would result in a combined shortfall of $9.7 billion in tax revenue from the city’s major tax sources for fiscal years 2020 and 2021, resulting in a difference from our prior forecast in expected revenue of $2.9 billion (-4.6 percent) in 2020 and $6.7 billion (-10.5 percent) in 2021. (Unless otherwise noted, all years refer to city fiscal years.) The shortfall in tax revenue, relative to IBO’s baseline, continues into 2022 with a difference of $4.4 billion. Although the projected decline in tax revenue is greater in 2021 than in 2020, the impact of the drop in 2020 is amplified by the fact that it occurs in a single quarter of the fiscal year.

IBO based its estimates on a forecast of the U.S. economy in recession for the first three quarters of calendar year 2020, with real gross domestic product (GDP) falling by about 4.5 percent for the year as a whole. This compares with our January baseline forecast of 1.8 percent output growth in 2020. The blow to the economy will be especially strong in the second quarter, when real (inflation-adjusted) GDP is expected to plummet by about 30 percent on an annualized basis. While the recession is assumed to end with a modest rally in the last quarter of calendar year 2020, we anticipate little further growth until the latter half 2021, in line with the premise that consumer and business confidence will remain weak until there is a medical or epidemiological resolution to the further spread of Covid-19.

Damage from the pandemic is particularly intense in New York City because the city’s economy relies heavily on industries that have been largely shut down in order to limit the spread of the coronavirus. These include the retail, transportation, tourism, leisure, and entertainment industries. Under our scenario, retail employment will fall by 100,000 starting in the second quarter of calendar year 2020 (a loss of 60,000 jobs is expected in this quarter alone), with loses continuing through the first quarter of 2021. Over the same period, we project a loss of 86,000 jobs in hotels and restaurants along with a combined loss of 26,000 jobs in the arts, entertainment, and recreation industries. The remaining job losses will be spread across nearly all of the city’s industries. Although finance and professional services are also expected to see declines in employment, IBO projects the most severe job losses will be disproportionately concentrated in sectors with low- and moderate-paying jobs. The only major sector of the city economy likely to avoid job losses over the next year will be health care.

The timing and size of the anticipated declines in tax revenue vary by tax, reflecting how sensitive each tax’s base is to the state of the economy and when tax payments are due. The largest drops in expected revenue are in the personal income tax and the sales tax, which are both very sensitive to economic conditions. On the other hand, because of lags in the assessment process, the property tax is expected to see only small declines over the next few years, with most impacts on real estate values occurring in 2023 and beyond. 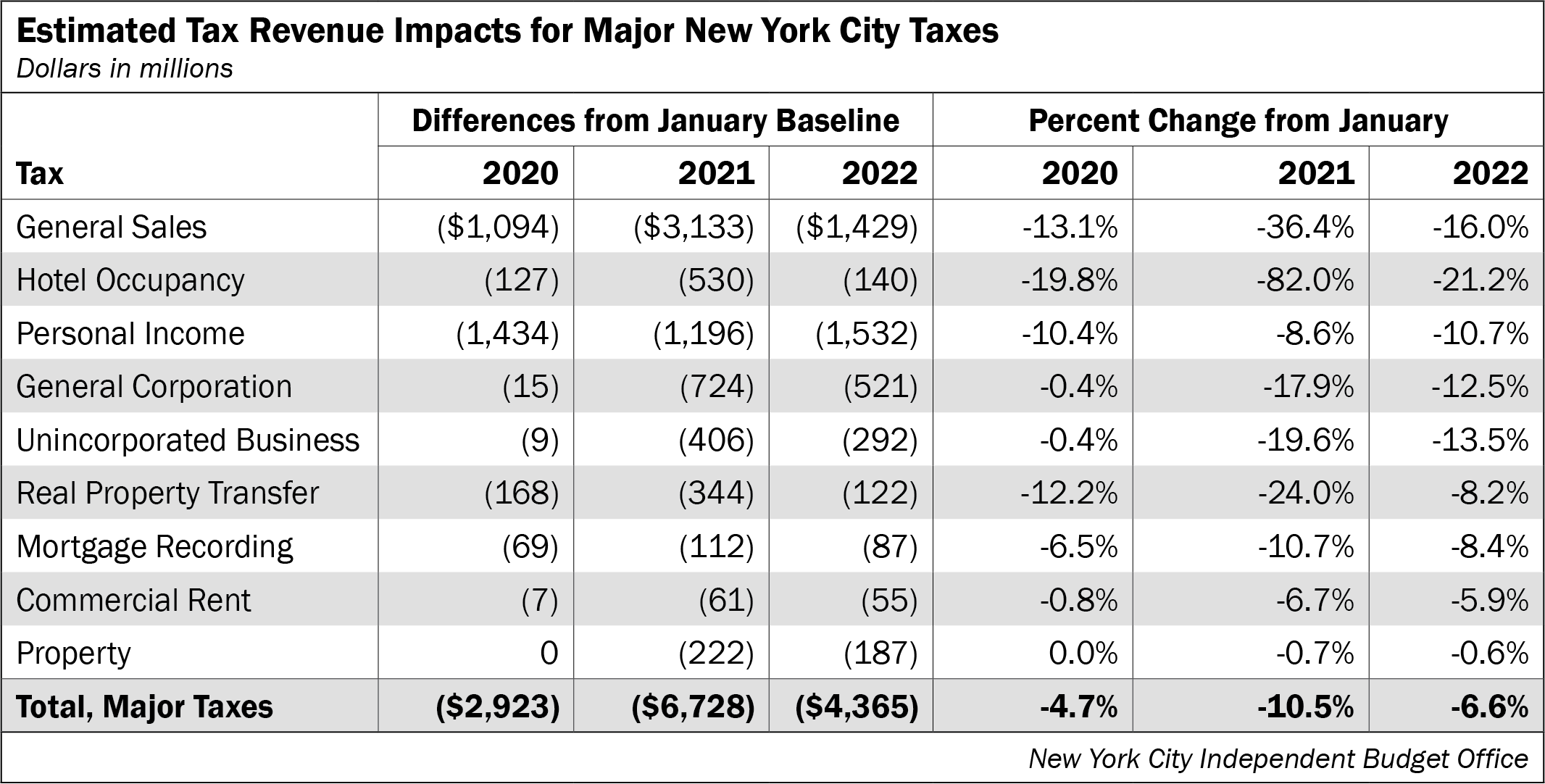 Sales Tax. Under our scenario, sales tax revenue would fall short of IBO’s January baseline forecast by $1.1 billion (-13.1 percent) in 2020 and $3.1 billion (-36.4 percent) in 2021. Two sectors of the economy—leisure and hospitality and retail businesses other than food and groceries—that have been particularly hard hit by government orders to close or greatly restrict their operations comprise about half of the sales tax base. Prior to the shutdowns, leisure and hospitality, which includes sports and entertainment, accommodations, and bars and restaurants, accounted for 21.6 percent of all sales subject to the sales tax, while retail other than food, groceries, and alcohol added another 28.5 percent. As long as the social distancing rules are in place, total taxable sales occurring in those establishments will be greatly reduced. In an effort to ease burdens on businesses, New York State has extended tax filing dates, which will likely shift some revenue that would have been received in 2020 into 2021.

Hotel Tax. The city’s separate tax on hotel occupancy tracks closely with sales tax revenue from accommodations. The number of tourists visiting the city has fallen dramatically and convention business has largely been suspended due to public health edicts. With greatly reduced hotel occupancy rates—below 20 percent during the second half of March—and room rates adjusting to the lower demand, hotel tax revenue is expected to fall precipitously. Under our scenario, revenue would be $127 million (-19.8 percent) below IBO’s January baseline forecast for 2020 and $530 million (-82.0 percent) lower in 2021, when the number of nightly room rentals will be less than half the number we projected in January.

Personal Income Tax. Personal income tax (PIT) revenue is expected to fall $1.4 billion (-10.4 percent) short of IBO’s January baseline in 2020, followed by shortfalls of $1.2 billion (-8.6 percent) and $1.5 billion (-10.7 percent) in 2021 and 2022, respectively. PIT revenue is particularly sensitive to employment and earnings, as well as capital gains realizations—all of which are now expected to be much lower than we assumed just a few months ago.

Withholding collections, which account for about 75 percent of PIT revenue, will be affected quickly as the job losses mount. In our scenario, withholdings are projected to be 33 percent lower in the April-June quarter than expected in our last forecast. A change in state law has postponed final return filing and payment deadlines from April until July, shifting a large portion of the cash the city typically collects in the last quarter of the fiscal year to the first quarter of fiscal year 2021. (For fiscal accounting purposes, this still is counted as fiscal year 2020 revenue because the city expects to accrue these delayed payments back to 2020.) IBO expects PIT installment payments, which are made by individuals with capital gains and other nonwage income, to fall by 50 percent in the April-June quarter, leaving 2020 installment payments $303 million (-15.9 percent) below the level we forecast in January. Similarly, IBO now projects that installment payments in 2021 will fall short of our January forecast by $449 million (-23.5 percent).

Business Taxes.The city’s business income taxes are also quite sensitive to the state of the economy, although because of the timing of payments, the effects of the rapid shutdown of businesses will largely be felt in 2021 rather than 2020. With financial services and professional and business services expected to experience lower profits or losses under our scenario, revenue from the general corporation tax (GCT) would fall $724 million (-17.9 percent) below IBO’s January baseline forecast for 2021, and $521 million (-12.5 percent) below in 2022. The unincorporated business tax, which is paid by partnerships and proprietorships, would fall short of the baseline by $406 million (-19.6 percent) in 2021 and $292 million (-13.5 percent) in 2022.

Property-Related Taxes.The real property transfer tax and (to a lesser extent) the mortgage recording tax are closely tied to the state of the city’s property markets. Our scenario assumes a decline in the number and value of transactions, but the decline is significantly smaller than the collapse that occurred in the aftermath of the 2008 financial crisis. The 2008 crisis originated in the housing sector, and the recovery of property markets lasted over a decade. It was only in 2019 that combined revenues from the two taxes finally exceeded their total in 2007, after adjusting for inflation.

The city assesses the commercial rent tax on tenants renting commercial space in buildings in much of Manhattan. Most tenants with annual rents less than $500,000 and income below $5 million are exempt from the tax. Because only a small portion of commercial leases turn over each year, near-term changes in rent for new leases have only a small effect on total commercial rent tax revenue. Thus, even a severe recession would not cause a major decline in revenue until several years after the onset of the downturn. Under our scenario, rent tax revenue would fall by $7 million (-0.8 percent) in 2020, $61 million (-6.7 percent) in 2021 and $55 million (-5.9 percent) in 2022 compared with IBO’s January baseline.

Property Tax. The real property tax is the city’s single largest source of tax revenue and at least in the near term, property tax collections are not particularly sensitive to changes in economic conditions. Under IBO’s scenario, the property tax would see the smallest declines in percentage terms among the major taxes. Relative to IBO’s January baseline, there would be no change for 2020 and a difference of $222 million (-0.7 percent) in 2021 and $187 million (-0.6 percent) in 2022. The shortfalls in these years are due to likely increases in delinquencies and an increase in refunds rather than declines in property values due to a recession. In subsequent years, however, it is likely that revenue would show substantial effects from a recession as severe as the one in our scenario.

Property taxes are generally more stable than income or sales taxes, which is why they are the mainstay of local public finance. In the case of the city’s property tax, there are a number of stabilizing factors. One is the city’s reliance on data on sales prices of properties and income of commercial properties that are 12 months to 18 months out of date when the actual property tax levy is set. Early in a downturn, the levy is based on prerecession incomes and by the time data from recession years is included in the assessment process other tax sources have usually begun to recover. A second factor is the phase-in of changes in property values over five years. As a result, changes in market values brought on by a recession can take several years to show up on the assessment rolls used to levy the tax on property owners.

Worst Recession Since the 1970s?

In terms of its impact on employment, a recession in which the city lost 475,000 jobs would be the worst it has faced since the early 1970s. Given the extraordinary pace of job losses expected under this scenario, IBO’s estimates of the extent to which tax revenues will fall short of expectations is also almost certainly greater than in any two-year period since the end of the city’s fiscal crisis.

Given how little is known about the persistence of the Covid-19 crisis and how long the economy must remain shut, however, there is great uncertainty about the depth and duration of the expected recession and the strength of any post-recession bounce—let alone the recession’s eventual impact on tax revenue. In the coming weeks more information about the economic effects of the pandemic and the efforts to fight it, as well as more recent trends in tax collections, will become available. IBO will draw on this additional information to offer an update of our projections in May as part of our review of the Mayor’s Executive Budget.