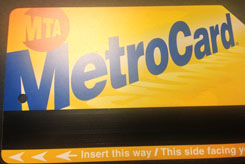 There’s a particularly opaque source of revenue in New York City Transit’s financial plan that’s called, in jargon only a bureaucrat could love, “fare media liability.” What it amounts to is the transit agency’s loose change jar. It is where the transit agency accounts for all those nickels, dimes, quarters, and sometimes bigger sums left unused on lost and expired MetroCards.

Last year, the jar was pretty full since it held more than $95 million—an unusually large amount that resulted from transit riders stocking up on MetroCards prior to the December 2010 fare increase and then some of those cards expiring with funds left unused. While $95 million is just a small share of the $3.7 billion the transit agency collected in 2012 in fare revenue, it’s still a lot of nickels and dimes, especially for an agency often knocking at the door of City Hall and the Capitol building in Albany for fiscal help.

But the jar may not be nearly as full in the future. The reason is that in March New York City Transit started to charge riders $1 every time they bought a new card rather than refill the one they already had (at least until that card expires and you can then get a free replacement). The transit agency expects fare media liability will drop to the more typical amount of about $52 million this year and, with a full year of the replacement fee in place, fall to $41 million in 2014.

The new charge has clearly changed many straphangers’ behavior. Subway station floors are no longer littered with MetroCards, empty or with small change left on them. The transportation agency expects to soon announce details that show the number of new cards issued has fallen substantially and the number of cards refilled has risen dramatically, according to agency spokesman Adam Lisberg.

The policy of promoting reuse of valid MetroCards and charging for replacement cards (damaged cards are replaced for free) is wrapped in the earnest rhetoric of environmentalism and is called a “green fee.” But there are fiscal motivations as well.

The charge for new cards will generate a projected $24 million in revenue this year, according to a Daily News article. Many tourists and business visitors who want to use public transit will have to pay the fee to get a MetroCard and New Yorkers who don’t have a card for whatever reason will also be paying the new card fee.

The policy also will generate savings. The transit agency typically produced about 160 million cards a year at a cost of $10 million. But with fewer new cards needed, New York City Transit expects to save about $3.8 million by producing about 60 million fewer cards annually. And with less MetroCard litter, there’s some savings on cleaning too.

Yet as the transit agency’s financial plan anticipates, there will still be a stash of unspent change on expired MetroCards. Some of that will come from tourists and other short-term or occasional riders who buy a card and wind up not using all of the money placed on it.

Many everyday riders also will contribute to the ongoing accumulation of fare media liability. The transit agency’s method of providing discounts ensures this. Under the latest fare hikes, the transit agency provides a 5 percent bonus when riders put $5 or more on pay-per-ride MetroCards. But that $5 only gets you 25 cents more on the card, well short of the $2.50 needed to swipe through a turnstile. You need to put at least $50 on the card before the bonus will net a bus or subway ride.

Many cards are likely to be lost or forgotten before the 5 percent bonus adds up to a ride or they will expire with an odd amount left on them. Although the transit agency gives riders two years to replace an expired card and have the funds on it transferred to a new one, many old cards are also likely to slip away with unused value.

As a result, New York City Transit can continue to expect to see some loose change aiding its budget.