Tucked into the state budget adopted last month is a special three-year tax break for New York families with children. The first of three annual rounds of checks for $350 per qualifying family will be sent out in October 2014 (just weeks before the next year’s gubernatorial and legislative elections) at a cost of about $400 million statewide. While New York City families stand to garner a large share of the checks, many will find their mailboxes empty.

An analysis by IBO’s Michael Jacobs, which uses data from a sample of 2010 income tax returns, finds that about 575,000 of the city’s tax-filing families with children will qualify for the check next year. Each of these families will receive a check for $350, bringing just over $200 million into the city.

But that same analysis also reveals that nearly 725,000 New York City families with children—families with an estimated 1.2 million kids—will receive nothing. That’s because in most instances they earn too little to qualify.

Here’s how the tax break, called Family Tax Relief, works: To qualify, a tax-filing family or household with at least one child needs an income after tax-deductions (adjusted gross income in tax-speak) of between $40,000 and $300,000, and they must have owed New York at least a $1 on their 2013 state income taxes. If the family qualifies, they’ll get a check for $350, regardless of whether they have one child or a dozen under the age of 17, and even if the amount they owed is far less than the $350 check they’ll receive. 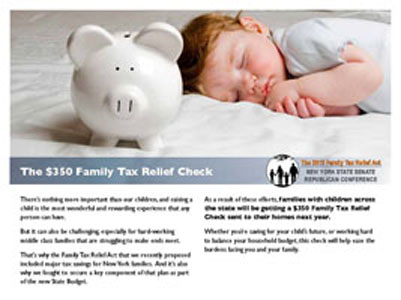 To put that observation into numbers: more than 190,000 New York City families with children and adjusted gross incomes from $100,000 to $300,000 will be receiving checks worth more than $66 million combined. But roughly 660,000 families with adjusted gross incomes under $40,000 will find their mailbox empty. Among those left out are about 126,000 families—most of them single mothers with children—with incomes below $40,000 but who still owe income tax to New York State.

New York’s Family Tax Relief bears some similarity to a 1991 proposal by former New Jersey Senator Bill Bradley to provide a $350 tax credit to families in the U.S. for each of their children. But Bradley’s plan called for the program to be universal, with everyone regardless of income getting help. If a family was too poor to owe taxes they would get the benefit in the form of a direct payment rather than a tax credit.

IBO’s Jacobs calculates that making the New York State program universal so that it covers all families with children—regardless of their income level or state tax liability—would more than double the cost of the program in New York City to about $453 million in 2014, even if the checks are capped at $350 a family no matter the number of children. Alternatively, if Albany were to let those single mothers and other families with incomes below $40,000 qualify for relief while maintaining the requirement that families have some tax liability, it would raise the total cost to the state of the Family Tax Relief program in New York City to roughly $245 million—about $45 million more than under the current legislation.